POVERTY TO BE BANISHED.

Prof. Hollander Thinks It Will Meet the Fate of Slavery

Special to The New York Times.

BALTIMORE, FEB. 12 – Dr. Jacob H. Hollander, Professor of Economics of the Johns Hopkins University, predicted better day would come when poverty would be as obsolete as slavery in an address to-day at the annual meeting of the Hebrew Benevolent Society. This opinion, he said, he based upon his historical studies and his personal investigation of charitable methods in vogue to-day.

“We have grown to look on poverty as a permanent condition,” he said, “but there was a time when slavery was regarded as a necessary condition. Even Plato in his vision of the ideal commonwealth included slavery. I believe someday that future generations will look back on the poverty of our day in the same astonishment we feel in contemplating slavery. The philosophy of history points in this direction.”

IN MEMORY OF PAUL AND LAURA LAFARGUE.

Every Socialist must have felt a shock when he read of the suicide of our well-known and able comrade Paul Lafargue and his wife Laura, the eldest daughter of Karl Marx. Yet why should this be? When Eleanor Marx deliberately sought death by poison at a comparatively early age, when her usefulness to the movement was becoming greater each year, that was deplorable indeed, and the circumstances which attended her passing away were terribly tragic and even horrible. To this day those who know all the facts shudder at Aveling’s cold-blooded complicity in that sad self-destruction. But this of the Lafargues was a very different matter. Paul Lafargue felt that he had done his work. He did not desire to drift into the period of decay and senility when he would marvel himself that the capacity and vigour displayed in his works had once been his. None should know him living save at his best. It was a similar feeling which inspired the great soprano Clara Novello when, retiring with her marvellous voice still full and resonant, she declared that the public should never hear Clara Novello sing badly. Lafargue was determined that the comrades who had known him and admired im in his prime should never pity him in palsied period.

He had earned the right to decide when he had had enough of life. His wife, who had stood by him, was entitled to choose for herself the manner in which she should meet her death, too.

There is nothing sorrowful, nothing regrettable, about such a departure as this. Lafargue had worked steadily for Socialism for 45 years, and he died with the full assurance, not of a life to come for himself and his wife as individuals, in the Paradise or Inferno of supernatural boredom, but of the glorious realisation of the splendid ideals for which they had striven in the days when the martyrs of the Socialist faith will he universally regarded as the heroes of humanity.

Paul Lafargue was one of the most brilliant pioneers of modern Socialism, one of the most devoted champions of the doctrines of the founder of scientific Socialism. Keen, witty, vigorous alike with pen and with tongue, an agreeable conversationist and a pleasing personality, he failed, somehow, to impress himself upon the people of Paris. What was lacking it is difficult to say. But certain it is that men of much inferior parts had greater influence even with his own Party in the French metropolis. Yet his articles, pamphlets and booklets were very bright and telling, while his addresses were assuredly not wanting in ability or vigour. His best work “Le droil de la Paresse’” (” The Right to Idle”) will remain a model for its telling irony and bitter exposure of the present system which condemns the mass of mankind to penal servitude for life and regards never-ending toil for the poor as their rightful share of the benefits of civilisation.

I knew Lafargue in London, both before and after I became a Socialist, and not unfrequently met himself and his wife in Paris and at Socialist Congresses. Like all his Guesdist comrades, he was an indefatigable propagandist, and never wearied of preaching privately as well as publicly the doctrine of material salvation. In his last writings he, in the opinion of many, pushed his purely material reasoning too far. But Lafargue did great and good work, accompanied by the mistakes which the doing of good work always entails.

He has gone from us, and his wife has gone with him. They both deserve that their memory should he cherished and honoured in our midst.

To Rachel and Abraham from Isidore M. In Yiddish and Hebrew. 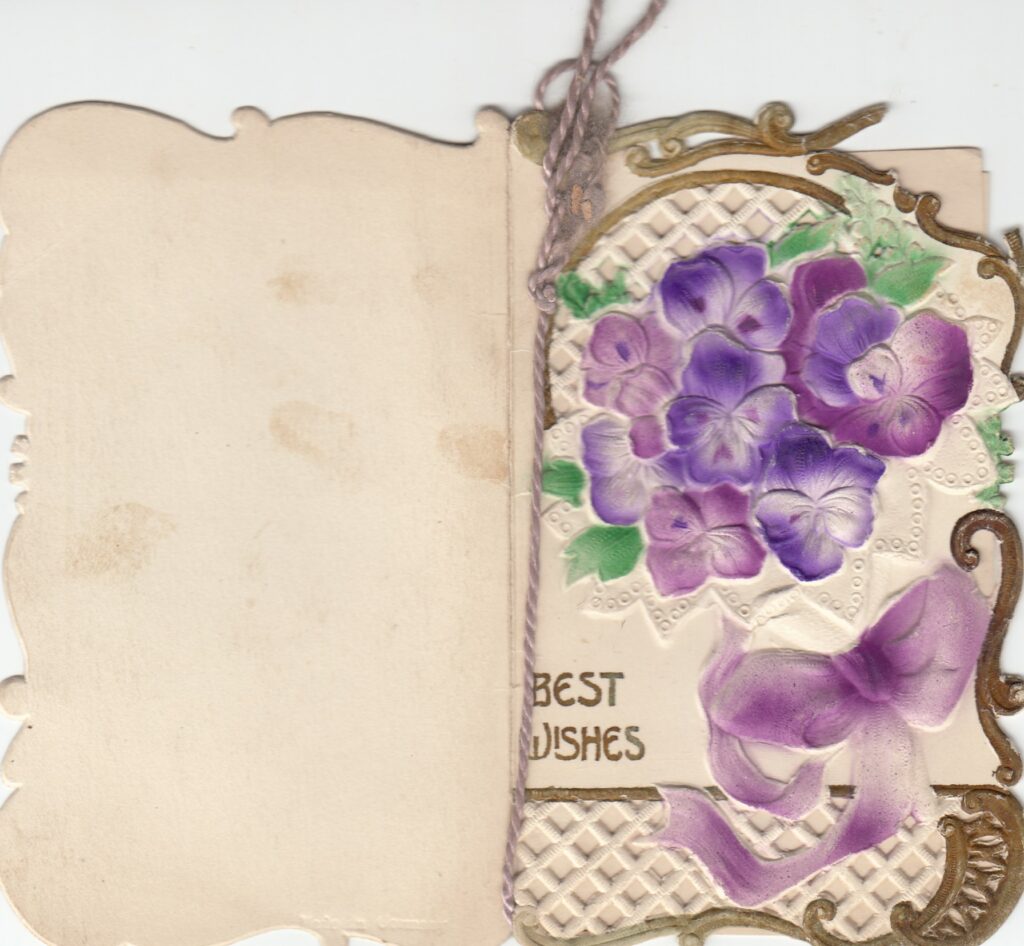 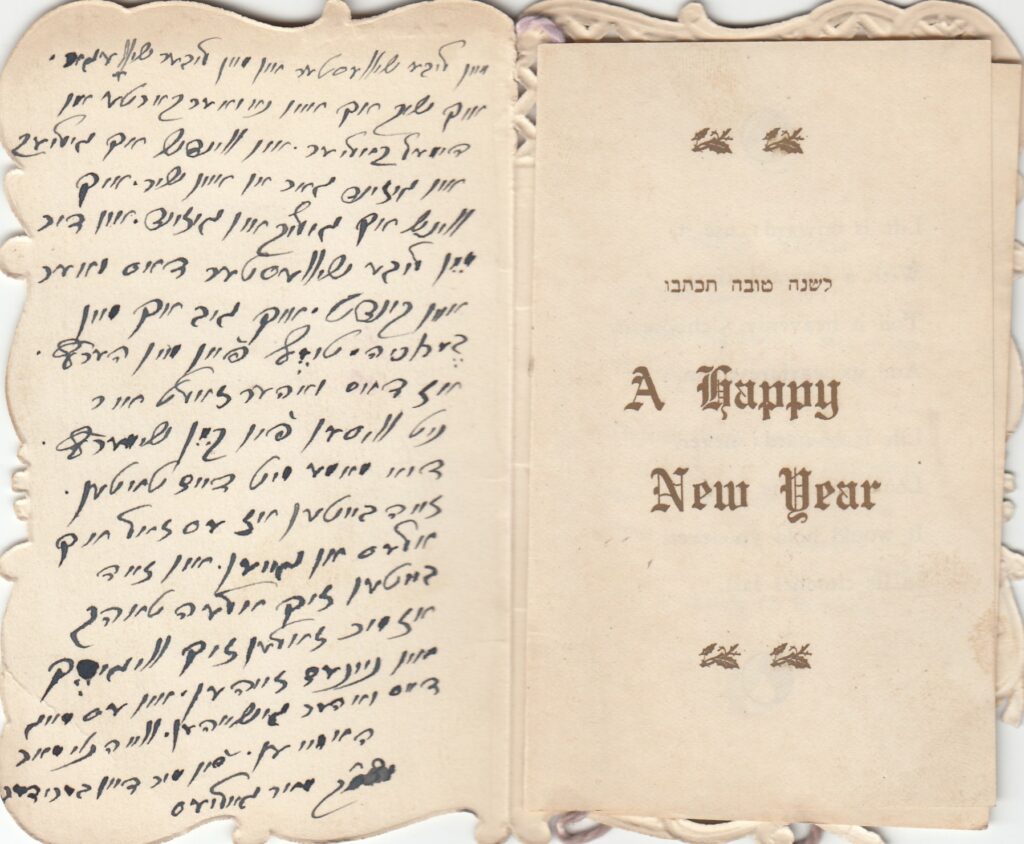 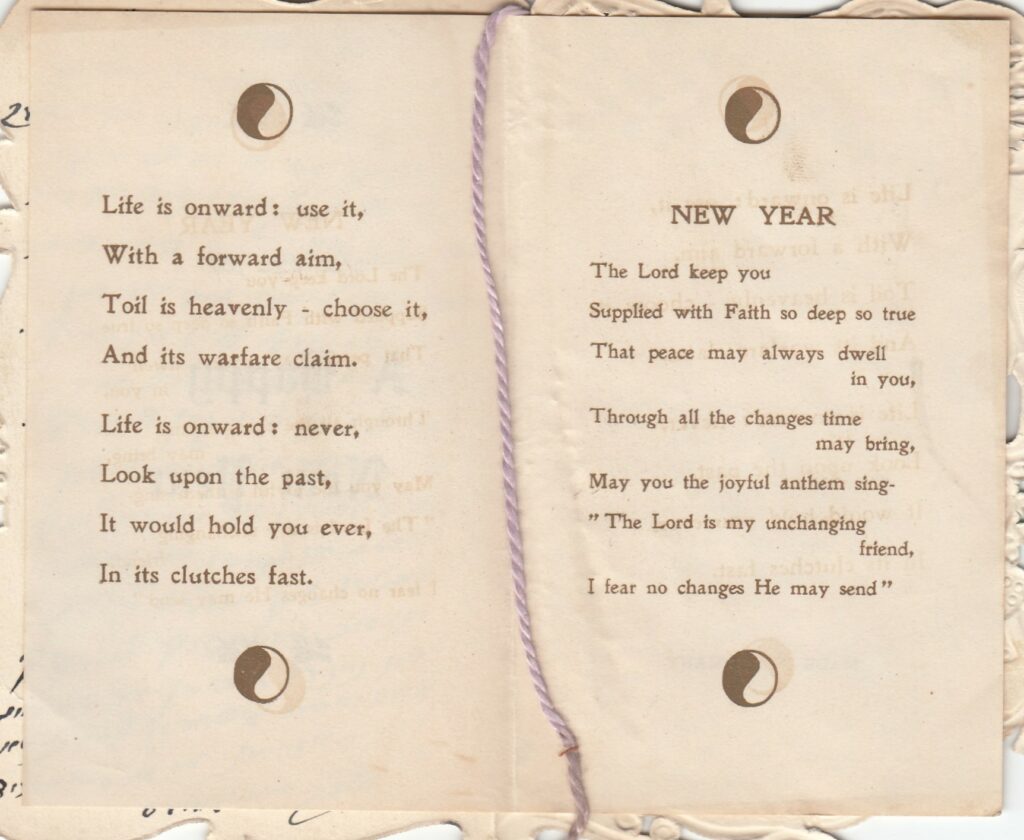 My dear Sister and my dear Brother-in-law

I send you both a heavenly blue New Year card and wish you happiness and health for the whole year. I wish you both happiness and health, and to you, my dear sister, this year a child. I give you my blessing deep from my heart that you should not have pain this year. Mother and Father pray that all will go well with you, and they pray every day that we shall all come together again and that it will happen this year. Venomar omein

To Abraham from Tilly. Written in English.

I am sorry to say we did not receive the letter which you refered to. Shandle went to the Post office to inquire about it and they told here that she is to know the number of the postal order. Will you send the number, and go into your post office, and tell them about it. Answer immiediatly. I am very anxues about it. as I am in need of it. we are all quite well. Hoping you are the same. And send the address of which post office you took the postal order. From mother.

To Abraham from Jane. Written in English.

We are all quite well hoping you are the same. I have been to the post office a few times already, and they told me I need not trouble myself any more they will find out for me, but they did not let me know yet. You try and find out there yourself. Let me know if it was a crossed postal order. I am surprised at you to send 257 franks in a post order, you ought to of sent it registered it would have been safe. I am sorry to say that Annie G. is very ill. She has to go to the hospital. Next letter write Yiddish as no one is here to read.

Fondest love from all.

To Suzanne F. from Abraham. Written in French.

I received your letter and I must admit that I felt a lot of shame when I read the paragraph where you remind me of how much I still owe you. This is not because I don’t want to pay you, trust me, but due to bad circumstances. Do you remember how bad luck has been upon me during the first two years after my wife left me? At first it was my knee that prevented me from working for six weeks, then it was my hand that prevented me from working during 3 months and then was Sheike’s illness and death. All these circumstances did not allow me to earn enough to provide for my needs. Slowly last year I started to recover, and I started to repay my debts. This year, I already paid Mr T. 70F, Mr R. 30F, his father in law for the bread 20F, to the Parisian fraternity 50F, now I am paying the sculptor—I owe him 70F and already repaid 30F. I have been in debt since my wife left me. Now I only have to repay the sculptor and then you and I will have no money left. You must forgive me for deferring the moment when I will pay you back. This is for two reasons first because I was not being asked with as much insistence by you than by the Parisian fraternity and the sculptor. Secondly, because I figured it would be less bother for you than for Mr. T., Mr. R. or his father in law…