EXPULSION OF JEWS FROM RUSSIA.

As a result of the recent severe laws passed on Jews in Russia, a contemporary has published a translation of a letter from a Jewish merchant. He says: We are driven from our posts as notaries. Thousands and tens of thousands of Jews who acted as clerks to the government officials in the towns and in the government offices of the villages have been discharged, to the regret of their superiors. Our people have also been dismissed from the post-office, the railways, and the telegraph offices, and from every other post under Government. How are we to live and maintain ourselves in the midst of such people?

EXPULSION OF JEWS FROM RUSSIA.

Many Jews resident in Askhabad have received a month’s notice to wind up their affairs and leave Trans-Caspian territory. During the past ten days also upwards of 750 Jewish families have emigrated from Berditscheff for England, America, and Australia. Others are to follow.

A correspondent writes from Odessa:– “Notwithstanding official denials, the value of which ought to be well known in England by this time, the stringent laws against the Jews in Russia are being put into force with great severity in South Russia. During the past fortnight I have had several opportunities of conversing with Jewish families who have received orders from the Russian Government to quit the country, and are leaving for England or America. I have invariably heard the same sad story—viz., an order from the authorities to leave the country within seven days. No reasons are assigned for these summary expulsions. Upwards of 600 Jewish families have been expelled from Odessa alone during the past three weeks. From Breditscheff more than 3,000 Jews have left the country, either for England or America, during the past few weeks, and from Rostoff and other places in South Russia I am informed on the best authority that the same thing is going on. Nearly all these Jews that are being expelled belong to the poorer classes, and the hardships of the road before being cast adrift on the frontier by their escorts are at this season of the year especially trying, owing to the great summer heat we are now having in South Russia; to-day it is 140 deg. Fahrenheit. The influx of such a class of foreign paupers into England-will have to call for the serious attention of the British Government.”

THE JEWS IN RUSSIA.

ST. PETERSBURG, Saturday. The repressive measures against the Jews are beginning to bear fruit. One of the noteworthy features of the present commercial depression in Russia is the decadence of the flour-mill industry, which, in its turn has led to a considerable decline in the price of corn. Many of the mills belonged to Jews who, having been forbidden to live outside the limits prescribed for the residents of members of their faith, were compelled to give up their business, and their mills have since stood idle. The Novosti, in commenting on this state of things, expresses the opinion that the wholesale expulsion of Jews from the districts not specially assigned to them is one of the main causes lying at the root of the present critical condition of commerce. As soon as the organisation of Sebastopol have a purely military port is completed no Jews will any longer be allowed to reside in the town.

Mr. Gladstone writes to us:

I have led with pain and horror various statements respecting sufferings of the Jews in Russia.

The only recommendation I can give is that the active exertions of the newspaper press should be invited first to sift the reports and establish the facts, and then, if they shall be established, to rouse the conscience of Russia and Europe in regard to them.

Yours very Faithfully and Obediently hello, 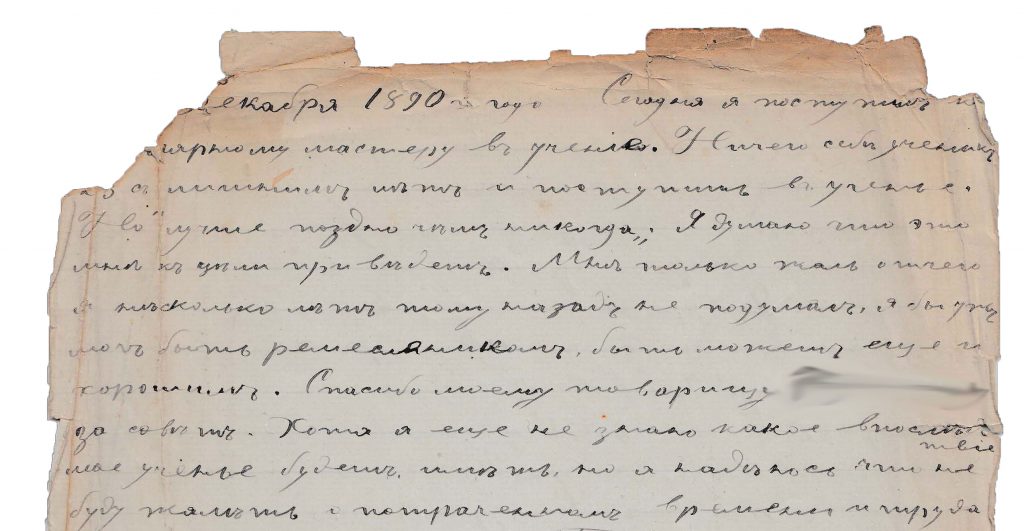 Today I started as an apprentice to a joiner. Some apprentice I am. 23 years old and starting to learn a craft! Still, better late than never. I think it will lead me to my aim. The only thing I regret is not having thought about it several years ago, I could have been a craftsman by now, and maybe even a good one. Thanks to my pal C. for his advice. Although I don’t know yet what will come out of this apprenticeship, I hope I will regret neither the time spent, nor the labour.

Joinery is very hard work. I feel my strength leaving me as I am planing and sawing. I can’t saw even half an arshin of board in one go, without stopping. Also, my hands get scratched. As soon as the scratches heal in one place, they start festering in another. Never mind, it’ll get better! No craft comes easily. Being idle, doing nothing is also hard work… until you get used to it. My master says it was the same for him when he was starting to learn.

Today, having seen my work and diligence my master promised me success. He said that a pupil who had worked for six months would not have done as well as I have. I don’t know if it is true or whether he is just flattering me. In any case I know that the saw is still crooked and the plane doesn’t want to follow the direction I give it. My earnings are very bad now. All in all, I don’t earn as much as 60 kopecks a day. This doesn’t even cover my expenses.